What is Shatter? The simple answer you are looking for is this: It is a highly concentrated form of cannabis, where it is extracted using butane. Shatter has increased in popularity over the last few years due to its glassy texture and potent taste.

Probably the new kid around the block, shatter is the latest entrant into the weed scene. Looking extravagant in its glass-like structure, it hits up like never before. But, what exactly is shatter? If we go by the dictionary definition, Shatter basically is:

“A brittle, glass-like cannabis extract, with a tendency to snap when handled. Shatter is named for its breakability, like broken glass, and is favored for its ease in handling while dabbing. It requires, long delicate purging cycles to properly remove all solvents used in the manufacturing process” (Source: weedmaps.com)

Often referred to as shattered wax, this beautiful weed type is very high on demand. Produced using a combination of solvents and weed plants, shatter is a type of cannabis concentrate which is translucent in nature. Although it sometimes appears in a dark yellow shade and bright honey amber shade as well.

The texture of shatter is unlike other weed products, and it varies depending upon the concentration of things. Sometimes it is brittle, while at other times, it has a very crunchy texture and snaps like a boss.

This texture of shatter can be attributed to the higher level of tetrahydrocannabinol(THC). So, shatter is basically a plate of shattered concentrates that literally shatters on impact.

Although a relatively new thing in the market, the history of shatter can be traced back to the late 1990s period. At the time, people were experimenting and refining the process in which cannabis was produced. Amidst all that, a flat concentrate of cannabis was born, which later came to be known as shatter.

BudderKing, a cannabis manufacturer in Canada, was the first to market shatter and budder. The first kind of shatter was available for the people to buy in 2003. In the early months of 2005, Cannabis Culture magazine published the detailed process of making shatter. By 2010, shatter became a vogue among people, especially with the slogan – “if it doesn’t shatter, it doesn’t matter.” (Source – weedmaps.com)

How is Shatter Different From Other Marijuana Products?

When the cannabis oil is extracted for making shatter, the molecules are placed on top of one another in a straight row, neatly. This arrangement of molecules allows light to pass through the extract, thereby giving it a translucent texture and glass-like appearance.

In contrast, for other marijuana products, the heat and moisture affect the extracted oil composition. They are often whipped and stirred, which causes the molecules to run in a haphazard manner, thereby giving them a cloudy appearance.

Since the molecules don’t allow the light to pass, they are more opaque compared to the translucent shatter.

In comparison to other extracts of marijuana, shatter is harder to break. In winters, it gets all the more hard. Therefore, it cracks very violently, sending pieces flying in all directions. Now you know where shatter gets its name from. 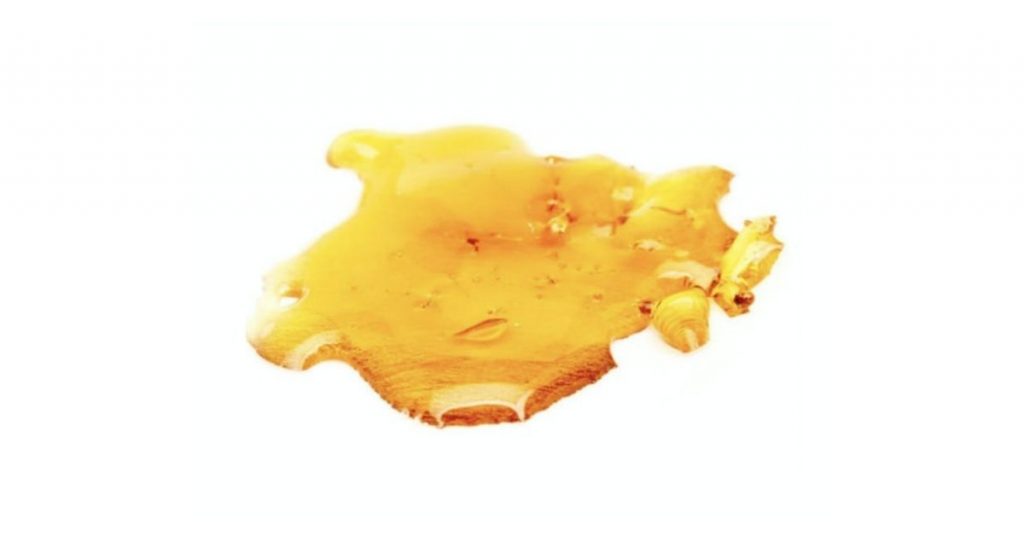 Since shatter is very potent in terms of the high it achieves, a little dab is enough to get you in a deep slumber of thoughts. The cannabinoids quickly enter the bloodstream, hence, giving you an instant effect. In this way, you actually consume less product making it one of the biggest advantages of consuming shatter.

With the consumption of shatter, the worry of the lungs going awry also reduces. Since you don’t need to roll a joint and smoke numerous, less smoke is directly proportional to fewer lung problems. With shatter dabs, consumers only get to inhale the vapor, therefore keeping the harmful chemicals out.

Even though you consume shatter in low quantities, the possibility of side-effects can never be ruled out.

Since the level of THC is very high in any cannabinoid product, it is imperative that the ones consuming are mindful of the probable disadvantages of shatter.

Although shatter is known to have therapeutic and medical effects, excessive consumption can lead to mental disorders like paranoia and anxiety. The possibility of an overdose can also not be ignored. Therefore, while consuming shatter, increase your dosage gradually.

How to Use Shatter?

There are numerous ways to use shatter, and it depends on the person consuming it. However, here, we have highlighted in brief the several ways of shatter use. Through dabbing, a person can consume the vapour using a vape pen. With the atomizer present in the vape pen, the shatter is quickly brought to the point of vaporization. As a result of this, the shatter melts, and you can inhale it using the vaping mouthpiece.

Will Eating Shatter Has the Same Effect?

Shatter needs to vaporize at some point to inhale it. Therefore, to have any desirable effect, it is imperative that you use vaping techniques. Eating shatter directly is unlikely to produce any effect at all. Having said that, you can melt shatter into edible oil and consume it together with whatever it is that you are having for lunch!

How to Store Shatter?

When it comes to storage, it is highly crucial that you store it in a proper way to avoid wastage of the product. In case of improper storage, the shatter can break and therefore lose its consistency. Hence, to avoid all this, you must store the shatter in an air-tight container. Never let the shatter come in contact with heat or direct sunlight since it can completely destroy the product.

Interested in reading more? Feel free to check out the following articles.

How To Store Shatter

Best Shatter in Canada: Overview of Common Questions About It

About the Author: Jay

Jay was born and raised in Toronto. He studied English at the University of Chicago before coming back to Canada for work. When he's not writing cannabis articles, he can be found biking and hiking.

www.online-weed.org| 15% OFF All Hash + 10 FREE grams of Candyland strain X